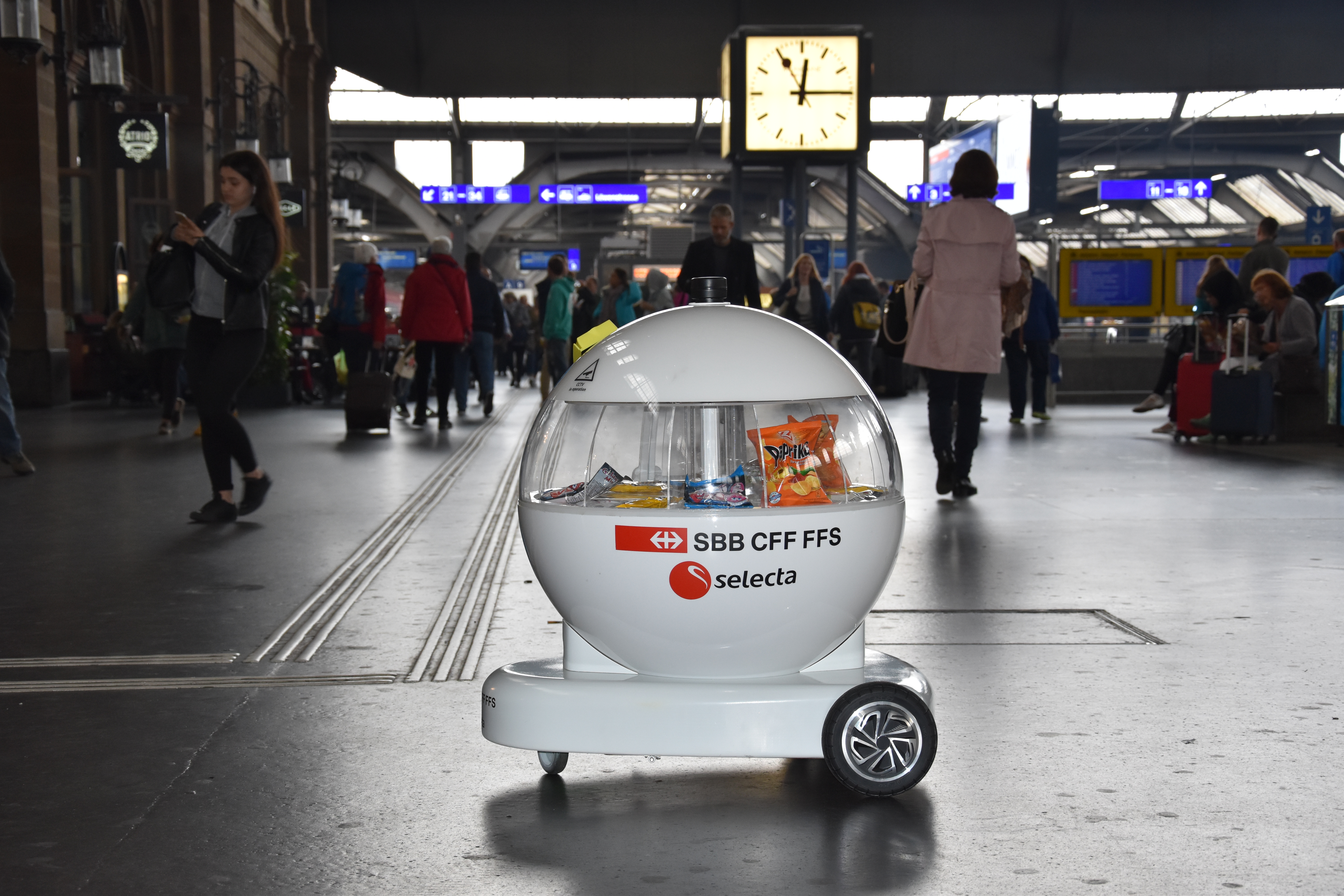 With the start of the new year, all but a handful of challenge contenders are racing down the home stretch with hopes to be crowned winners by crossing the April 2018 finish line. Bets I’ve covered recently like E-Democracy’s Crowdsourced Think Tank and Education Digital’s ICT-Workshops in Schools – are running neck and neck after breaking through the self-financing hurdle.

Which makes it ironic that while Mobility Smart Station is currently running as strong as any challenge round table bet, its jockey and owner are relatively indifferent about racing to the approaching finish line. The reason? At the start of the challenge nine months ago, Smart Station, championed by Swiss Railways SBB, hedged its bet, declaring a 2-year time frame rather than 12 months to make good their bet’s claim:

“The participants of the Smart Station project bet that by April 2019, they will have established Zurich Main Station as the world’s most digital, personal traffic hub for customers, tenants, suppliers and other innovative partners.”

Given their hedge, and compared to other exciting innovation-inciting bets I’ve been reporting, I questioned if this particular Mobility roundtable was merely repurposing a corporate mission statement as challenge bet. SBB’s 2020 Strategy statement fueled my doubts: “…We want to ensure growth is both smart and broad-based, by drawing on digitalization and new technologies and reflecting the various strengths of rail travel. We aim to be digital and personal at the same time…” The 2020 strategy declaration is signed by Monika Ribar, Chairwoman of the BoD, SBB AG and Andreas Meyer, Smart Station Table Captain and CEO of SBB AG.

Waiting under Niki de St. Phalle’s Guardian Angel in Zurich’s main station to meetup with the Smart Station project leader, I recalled my first conversation with Stefan Schöbi, Chairman of the challenge Steering Committee, when he said, “We all know that this (challenge) can stay as a marketing slogan or it can be turned into action …”

With Stefan’s warning top of mind, my mission today was clear: find evidence of what action(s) the Smart Station round table is taking right now to further digital innovation. After all, as a frequent customer of Zurich’s main station, I and 1.25 million daily Swiss travelers who use Swiss Railways’ system, will all be direct beneficiaries if their bet pays off. But I also have an obligation to digitalswitzerland readers and challenge participants not to pull any punches and tell this story like it really is.

The Smart Station bet is led by Bruno Lochbrunner, Head of Conceptual Station Management (which has to be one of the coolest job titles HR ever invented). Bruno shares desk space amongst the warren of walled offices above the Zurich main station. I suspected the building’s architect was a frequent player of the 1980 mega hit video game, Packman, as I followed Bruno down seemingly endless passageways intersecting at random right angles differentiated only by pastel wall colors.

Most of us who live and work in or near Zurich, know the main station as a convenient meeting point or conduit between arriving and departing. For Bruno, it’s his daily living environment. I asked how many hours per week he worked and if spending so much time in the main station wore down his excitement for implementing new innovation?

Instead of suggesting a number of working hours, he said, “To be honest I’m thinking about this all the time, even when I go on holidays. When I’m at airports and shopping centers and I see things, I take pictures. I have a thousand pictures from those malls and airports which give me input so I can learn from them and work here to make this (main station) a better place.”

What does ‛make better’ mean for you and me?

Once upon a time, I was the Marketing Director for a luxury property developer. A key insight to successfully marketing the company meant understanding what investors and buyers perceived of as “luxury.” In the same line of thought, I pressed Bruno to tell me what it meant to “make this (main station) a better place,” especially given an almost unlimited number of possibilities and equal number of people’s ideas of what “make better” means to them.

Bruno worried me by affirming their bet is part and parcel of SBB’s corporate vision saying, “to put mobility first and all that stuff. This (challenge bet) is one part, to make Zurich main station more digitized and more personal, a more customized train station…” Then he dropped his official SBB persona for a few seconds and confided, “I like to create and work with this big vision – but somebody has to execute. You cannot only write papers and talk visions and all that stuff. Somebody has to execute it. I’m happy that I’m that person, with my team, working hands-on doing things, doing the little things that bring SBB’s vision to life.”

The need for speed

Sensing my ulterior motive to discover if SBB’s bet was more than marketing, Bruno elaborated, “We started this challenge and we want to show people that we are taking it seriously. The first priority was speed. To make something visible for people this year.”

He continued, “Not like we make the station smart and big and then in two years you see something. We are serious about this challenge and we are going to make small improvements – they’re coming right now! And also show that it is not just a saying, ‛Smart Station.’ That was the first thing in 2017. In 2018 and 2019, we have to decide about speed.”

I asked Bruno to walk me through an example of how he’s implementing innovation in Zurich main station as we speak. Sounding like the proud father of a young child, Bruno began telling me about an autonomous robot he first saw attending a startup event in Germany. The robot was developed by the British/Lithuanian startup, Mio Technologies Ltd, and as Bruno recalls the moment, it was love at first sight.

A few weeks earlier, I’d encountered “Mario” (as christened by SBB), on the new lower level of Zurich’s main station. The day I met the Plexiglas bubble-topped Mario, he was surrounded by a pack of teenagers poking at his display screen and making selfies with him. Judging by how the teens were interacting with Mario, it was clear a mobile robot dispensing snacks and drinks had passed the all-important cool test. But beyond cool, Mario represents a viable alternative how a mega-sized enterprise like SBB, with 33’000 full time employees, can pragmatically implement break-thru digital innovation where collaboration and speed are crucial to success.

In KPMG’s annual cross-sector survey of around 1,300 CEOs, the top three strategic priorities of global businesses are boosting speed to market, fostering innovation and implementing disruptive technologies. Bruno explained how Mario exemplifies all three of those priorities. “We saw there’s a possibility to work with a robot startup and Selecta Group (one of our vending machine partners). We put them together and said ‛Okay, let’s make a showcase of Mario the vending machine robot. Let’s see how people react in the train station with this robot.’ We didn’t discuss it very long, we just made it happen. It was done I think in one week.”

Since not seeing the robot since my first encounter, I asked about customers’ feedback to the roaming robot kiosk. His face immediately lost its previous enthusiasm, telegraphing his answer. According to Bruno, 90% of the people who encountered Mario in person really liked it. But the media was not charmed or amused.

Not wishing to rub salt in Bruno’s wounded pride over the Swiss media’s shabby treatment of his brainchild, I changed course and asked if voice recognition was in Mario’s future,

particularly since the SBB Mobile App Timetable recognizes spoken Swiss German dialects thanks to collaboration with Swiss startup, Spitch AG. Bruno redirected my question by revealing they had another robot, “Alfred” (as in Alfred Escher), who is already equipped with voice recognition. Now if Mario is likened to the Star War’s droid R2-D2 – then Alfred would be C-3PO.

Given the media’s negative response to UFO shaped Mario, it wasn’t too surprising where Bruno told me Alfred could be found. “He’s here (in the main station), but right now, I think it’s packed in a box. This is a human (looking) robot, and it interacts more with people than Mario does. Because there are different companies behind Alfred, different startups, different combination of partners. We are not only working with Mario’s developers, but with different companies trying out these robot things; what they’re able and not able to do. To be honest, these robots have quite a lot to learn.”

That hat looks ugly on you!

In spite of Alfred and Mario’s lukewarm media reception, Bruno told me we can expect to see more customized service innovation like them in the next 12 months. Specifically, he singled out AR (augmented reality). As Bruno explained, “to give people advice about something, or give a hint where they find this or that service. It’s more a concierge idea, the service idea. If they lose something or need to replace something; make reservations, or give them advice – like telling you not to wear that hat – because it looks ugly on you!”

Bruno kept up a knowing smile making predictions of an AR future for all of us using Zurich main station. “Right now, it sounds like science fiction, but be aware. AR will come in six months or so and people will adopt it quite fast. That’s my thing.”

Having given my wife a VR headset for her birthday last year which proved an underwhelming experience (not to mention feeling guilty for choosing such a lame gift that’s never been touched since), my thoughts drifted as Bruno waxed optimistically about the future of AR. I interrupted them to learn if Smart Station was cross-collaborating to innovate faster and realize more things than they could do alone.

Easier on one hand, but then … it’s quite difficult

Bruno emphasized, “The platform, digitalswitzerland, makes it easier on one hand, but then … it’s quite difficult to get the right people in big companies like Swiss Railways, and to find the person who is willing to help you and who also knows about the challenge contest.”

My voice recorder’s display warned it was time to close-out my meeting with SBB’s Head of Conceptual Station Management. Bruno had patiently shared many more examples of Smart Station innovation than I can squeeze into this post. Fortunately, another of Bruno’s innovative ideas, a short story dispenser, was featured in an internal SBB post during the Silvester bridge. Give it a read or better yet, visit Swiss Railways travel center in the main station and push its button to get a free instant short story printed in your native language.

Before I packed up my notes and gear, I had to ask Bruno why, with their bet looking so promising, had they hedged their bet? Would they do it differently today?

The genie’s out of the bottle

Bruno stood up to bid good bye and said, “We have this challenge bet until 2019 with the Smart Station Zurich Main Station. After 2019, I think we’re not going to stop. Right now, we want to make stations smart. That’s an ongoing project and we’re not finished in 2019. This challenge was the kick-start. We have Zurich Main Station as an important stage, but the genie’s out of the bottle. We go on.”

The post The Genie’s Out of the Bottle appeared first on digitalswitzerland.